May it bring peace, prosperity, and plenty of good books to all of you.

Get three freebies, including my newest story, from Phoenix Pick and Galaxy’s Edge

My newest story is live in Issue 19 of Galaxy’s Edge.

Shattered Vessels, co-written with the talented Robert B Finegold, is a tale of love and loss, adventure and mysticism, and one too many knife fights.  It will take you from ancient Assyria to the Pyrenees to modern day San Francisco.

The issue is free to read until the next issue goes live (at which point the link I’ve included will take you to Issue 20 or beyond).

Now for Freebies #2 and #3 – Please follow the instructions carefully!

Galaxy’s Edge is celebrating its fourth year in business, and in true Hobbit style, YOU get the presents.

6) The eagle-eyed among you may have noticed a pink box at the top of the Phoenix Pick page. That’s a Pay What You Want (including nothing) deal on The Long Tomorrow by Leigh Brackett, plus a cheap three-book bundle featuring more Brackett, Hal Clement, Fred Pohl and others. The bundle isn’t free, but it’s a great deal on some classic SF.

Dear Puppies: Please talk about what you love

I’ve been watching this Hugo thing unfold with an ever-growing sense of disquiet. A lot of people are angry right now, and the anger isn’t helping anyone. In fact, it’s hurting people all over fandom, no matter where they stand on the Hugos.

Sometimes anger is productive, but I haven’t seen anything remotely productive out of this yet, so maybe it’s time to start talking about books.

“Oh, so we’re supposed to make nice and sweep it all under the rug?”

No. Talking about books doesn’t sweep anything under the rug. What it does is build common ground, and common ground is that place where productive conversations can eventually happen. Anger and more anger just makes everyone defensive. Doors slam, walls go up and people become more insular, not less.

“Why us, Kary? Why do we have to go first?”  Because there’s a lot of our stuff on the ballot.

If you love it so much that you nominated it, it’s time to tell the world about it. Which is your favorite, Dark Between the Stars or Skin Game, or was it something else entirely? Write a post on why your pick is so awesome. Put it on your blog, your Tumblr, your Facebook, etc. Heck, put it here as a comment.

Then do the same for your second favorite or something in one of the other categories. If we all do that, the internet will be brimming with book recommendations instead of outrage, which, frankly, would make it a much nicer place to be than it is now.

“But they started it!” At some point, it doesn’t matter who started it.

So let’s take a page from the Dread Pirate Roberts. Let’s put down our swords and rocks and talk about books like the genre intended. 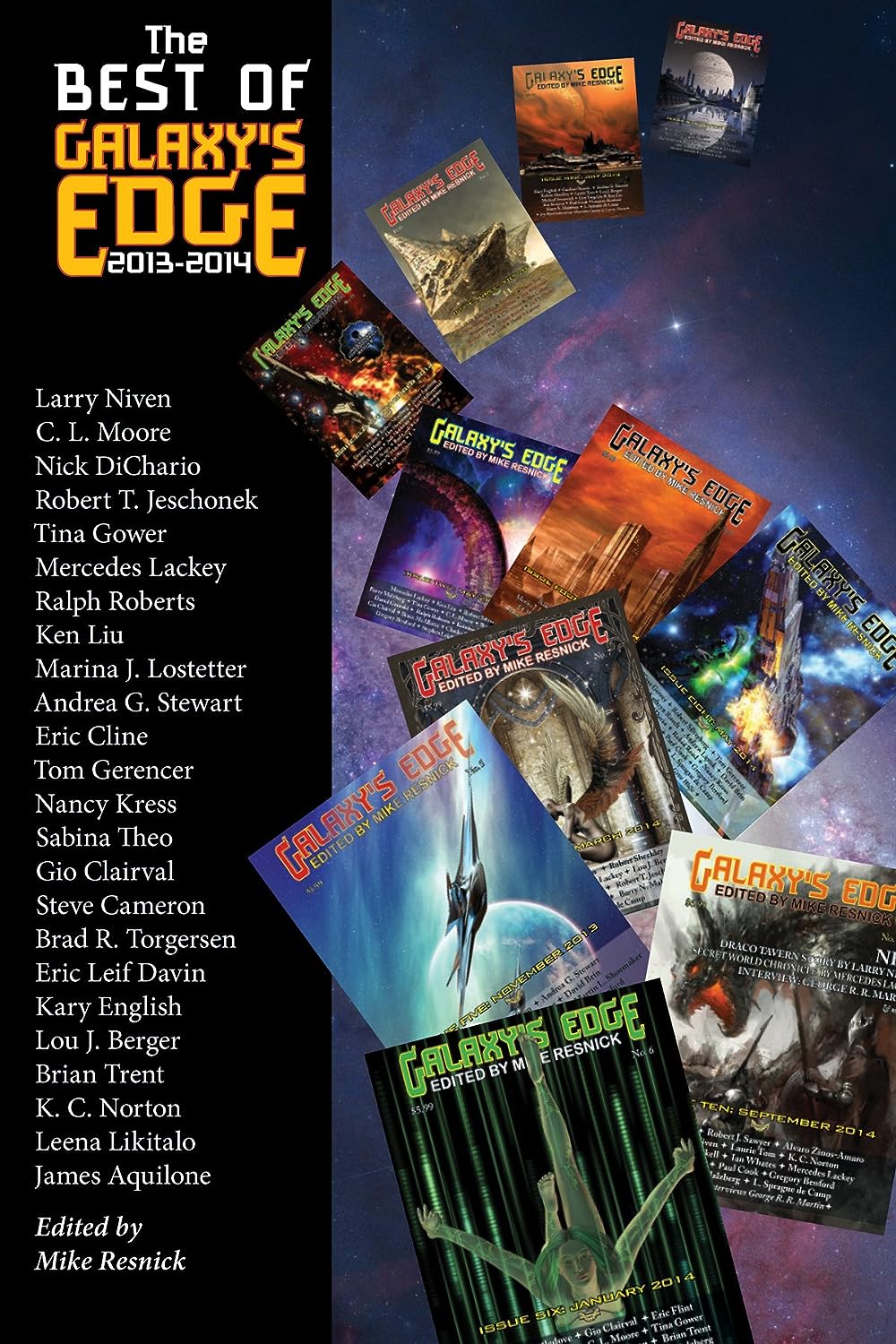 The Best of Galaxy’s Edge, edited by Mike Resnick

My publisher is offering a sale today!

Get The Best of Galaxy’s Edge, packed with 25 great stories including my Hugo nominee, Totaled, for just 99 cents.

Well, what are you waiting for?  😀

ETA: As of Thursday, 4/30, the sale is still going on. Grab it if you want it because I’m not sure how long the promo price will last.

Free mini eARC for #WOTF31! Who wants one?

In the next day or so, I will have a mini eARC for volume 31 of Writers of the Future to distribute to anyone who is willing to leave an honest review on launch day (or thereabouts).

Here are the deets:

Writers of the Future, Vol. 31

Oh, and here’s a plug for my story, POSEIDON’S EYES.

In a sleepy California beach town, spirits magnify both the good and the evil in human hearts.

ETA: I’ve also got two 99 cent sales for you!  Mike Resnick’s Best of Galaxy’s Edge has 25 short stories in it, including my Hugo nominee, and Writers of the Future, Volume 29 (not the current volume) is also on sale. Grab them fast because I don’t know how long the sales will last.

Reminder: Comments are moderated, and may not appear in a timely fashion if I’m busy writing or away from my computer.

Things I will not do to promote my work…

Shoot myself and blame it on a passing motorist.  Sheesh!